The Origin Story (so far)

“A dog is a bond between strangers.” ~ John Steinbeck

I got my first real job the day I turned 15. The vet’s office that the family dogs had gone to for years was about a mile down the road from where I grew up in Grapevine, and I had asked them if they were hiring when I was 14. They told me to come back when I turned 15.

I counted down the days. During my early, tender teenage years, I knew very little. But there were two pillars of my personality that gave me a kind of monastic vision for the future.

I love dogs, and I needed money to buy a guitar. I loved dogs for their own sake; I was, and am, simultaneously delighted with their simplicity and inspired by their depth.

I wanted a guitar because girls like dudes who can play guitar. Or, so I had been told.

They hired me on the spot on my 15th birthday. I was a kennel technician. $6.00 an hour. It was my responsibility to maintain the small kennel at the back of the vets office. Walking, feeding, watering, medicating the boarders. And, of course, playing with them. I was given a key to the vets office so I could get in when they were closed to take care of the boarders. I worked 7 days a week; a few hours after school every weekday, all day saturday, and I showed up twice on Sunday to tend to the kennel.

That Christmas, I woke up early in the morning, bundled up, and walked the mile to the vets office. It was filled to capacity. My Christmas morning was spent under a canopy of howls and barks, frantically trying to stay on top of the needs of dozens of dogs. That was the first Christmas of many spent in a kennel. As with many industries, the pet care busy seasons revolve around the holidays.

At that small kennel in Grapevine, there was a dog who would come in from time to time named Packy. Packy was a jet black miniature schnauzer, and I still remember him and think about him from time to time over a decade later. For no particular reason, either. I just liked him. He was feisty, playful, and tireless. When he was being boarded, I’d stay after hours just to play with him. And there have been many dogs like that over my years in pet care. Dogs that leave a big enough impression on me that I’ll never forget them, and they’ll pop into my head from time to time like old friends.

After high school I moved to Austin. As in, right after high school. I was hauling a mattress up three flights of stairs to the apartment my roommate and I would be sharing a mere 4 days after I was handed my diploma. You see, that second pillar of my personality, The Guitar, had gotten the better of me. I thought I’d take a crack at following the dream to the Live Music Capital of the World.

To pay the bills, I took on my first (and last) job that didn’t revolve around dogs. I was a cashier at a Panera Bread. Frankly, I hated it. I had no skin in the game. I didn’t care about Panera Bread, it’s culture, it’s goals as a business. I just needed a check. It was nothing like working in pet care.

Needless to say, the dream that brought me to Austin never exactly bloomed like my 18-year-old self thought it would. Eventually, I quit the job at Panera Bread and worked at a place called the Austin Pet Ranch. I link to them because they have my utmost endorsement. It was one of the most unique kennels I have ever worked at. It is actually on a ranch, and the dogs have ample room and are well taken care of.

Eventually I retreated back to Grapevine, The Guitar on my back, my tail between my legs. The Guitar had lead nowhere, and I wasn’t sure what to do next. However, before I moved back in with the parents, I already had a job lined up at a large, up-scale kennel in Southlake.

I worked there for over two years. That was where I was introduced to grooming. I was taught to bathe, and became a full time bather for my second year there. It’s some of the toughest work in the business, especially on busy days…the dogs can be heavy and uncooperative, the dryers are loud, and some dogs were an absolute mess. Dogs in a body-cast of mats. Dogs that had been skunked. Dogs that were terrified to be there, that took time and patience to work around their neurosis.

I realized the importance of maintaining a clean dog. Dogs have been domesticated for millennia. They aren’t wolves, or wild animals. They have sensitive skin and grooming needs. I saw recently rescued dogs come in who were an absolute mess; patches where hair had fallen out, brittle fur, nails so long they curled under the pad, and much, much worse. After being put on a regular schedule of maintenance bathing and grooming, their health, and happiness, improved dramatically. On the first day, fresh out of the shelter, they’d keep their eyes on the floor. They’d shake nervously. You could see the pain on their faces.

By their 4th or 5th visit, they’d be wagging, giving sloppy kisses, and greeting new people with confidence. Whatever skin conditions they were struggling with would be waning. It’s one of the most satisfying feelings in the world to help in the process of rehabilitating a dog who had fallen on hard times.

Eventually I left that kennel to go to school, winding up with an Associates in Communications, and worked at a couple other kennels here and there as a bather. The Two Pillars in my life remained; dogs and guitar. It was around this time that I moved to Dallas and started dabbling in live comedy, taking classes at Dallas Comedy House. That became the Third Pillar.

Earlier this year, I made the choice to go to Texas Allbreed Grooming School. They offer a relatively intensive course; you start grooming the second day there. It’s a 40 hour per week course, where you’re taught the bulk of what there is to know about grooming, discerning breeds, the finances behind running a grooming salon, etc. I loved it; I walked in as a bather and left as a groomer. It’s one thing to groom a dog to improve their health; it’s another thing to make the dog look great as well.

After working at a small salon for a while, I began doing house calls on the side. It didn’t take long for me to realize that there was more potential there than simply making a few bucks on the side. Dogs universally have a much better grooming experience in their home. There were dogs that I groomed with relative ease who couldn’t be groomed in a salon because they would get overly excited by all the other dogs and commotion. They didn’t have to spend all day at the salon in a small kennel waiting for their turn on the table. And, most importantly of all, their owners were right there, and I could focus exclusively on the pup on my table without the distraction of being in a hectic salon environment.

So I made a leap. One of those leaps that makes your palms sweat and your intuition run wild in your gut like an excited ferret. I launched Posey’s Pups on October 30th, 2017, shortly after my 26th birthday. The idea behind Posey’s Pups was to focus on the housecall exclusively, and put the comfort of each pup at the top of the list of priorities. If you are a client of mine, there’s a good chance that your dog pops into my head from time to time, just like Packy. I know from experience that taking a dog to a hectic salon or loud, busy daycare can fill one with guilt. Well, housecall grooming takes guilt entirely out of the equation. 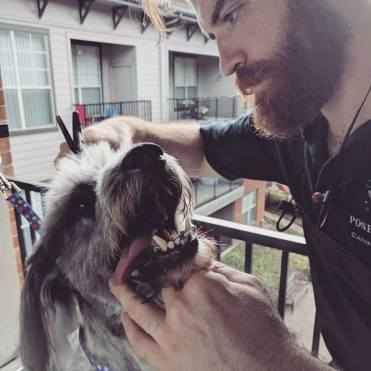 After I finish up a groom, and put a bandanna or bows on the pup and give them a spritz with the blueberry cologne, I give them a pat on the head and send them back to their owners, who are usually somewhere else in their house or apartment. Then, as I’m cleaning my shears and clippers, I wait for it. I wait for the “awwww! Look at you! You look like a brand new dog!” or something along those lines. That moment is why I love what I do. It is worth all those Christmas mornings spent in busy kennels surrounded by pups, learning about them, learning from them, and loving them.

Thanks for reading. See you at the grooming table!